You take with you in a situation all the good and bad practices that you learned in your training routine. If your tactics in your training consist of fancy kicks and wide movements, which require you to have a lot of room, you will automatically do the same when your adrenaline kicks in an assault. That will really hinder you if you are fighting for survival in a confined area with furniture or other items around, such as an office, living room, or bedroom. Your self-defense training should also focus on the mind/spirit as well. Self-defense is more mental than physical. Regardless of how efficient your self-defense moves are, if you don’t get your mind right for fighting, you will certainly immobilize. 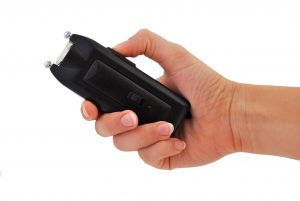 Even though the stun guns’ electrical current charge is non-lethal, there are many controversies surrounding the use of stun guns as weapons and a self-defense tool. The debate is focused on justifying the use of the stun gun. There is talk that in some cases, health issues are thought to be because of the use of a stun gun.

Manufacturers instructions and disclaimers warn that the prolong exposure to the electrical current given by a stun gun can be possibly fatal.
The United Nations reports that the use of stun guns can be a method of torture because of the pain they cause some individuals, or death in certain instances.

They are also banned because of their increased potential for abuse. There have been several cases of excessive stun gun usage as a form of torture. It is said that stun guns are utilized to bring pain on individuals that are cruel.

Stun guns don’t cause the markings that other beatings can, so the cases of abuse are just allegations.

There are also uncertainties about the effectiveness of stun guns as a self-defense weapon. Many folks carry some sort of stun gun or taser on them for protection, but without the right training, the stun gun/taser is useless.