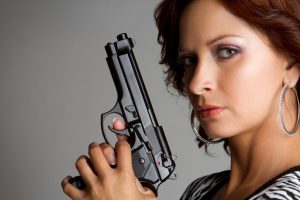 Women’s hands aren’t anything like men’s hands. Female hands are littler and typically not as strong as a male. Actually, women’s bodies are usually smaller too. It’s just simple anatomy. While this really doesn’t mean that women can’t shoot a handgun just as skillfully as a man can, it does mean women may have a preference when it comes handguns types. Women can carry and shoot, particularly if their goal is to carry a concealed firearm.

It’s not just a gun’s grip style or frame that makes a difference. The caliber of the pistol is also an issue. Normally, the bigger the caliber, the weightier the power and recoil. Nonetheless, it will be more difficult to make repeated shots with precision.

Many women have .380 caliber handguns. While it’s a solid choice, sometimes women buy them because it’s what the salesman suggested. The .380 is a good round, but there are other, more mighty rounds obtainable and models in other calibers that you may find easier to shoot because of the dissimilar frame size or because the weight and design of the gun offers a recoil in a more comfortable way. Here are a few common handgun calibers:

.22s are good pistols to learn with if you’re a new shooter. Both semiautomatic pistols and revolvers are chambered in .22. They barely recoil at all and are great to shoot. A .22 doesn’t have a lot of power and so isn’t a good choice for a conceal carry pistol. Many popular concealed-carry models in bigger calibers can either be bought with a .22 conversion kit or have a matching model in .22 caliber. Ammo can be hard to find in today’s market.

This revolver caliber is a solid “middle of the road” round. It’s a good self-defense caliber, but has less of a punch than its bigger cousin, the .357 Magnum. Also, a revolver chambered in .357 Mag can shoot .38 Special rounds.